We're having a candlelight vigil for Steve tonight 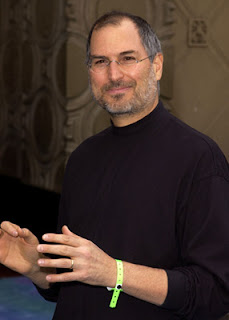 By now I'm sure you've heard how the SEC is trying to trap Steve by subpoenaing him in the case against former Apple general counsel Nancy Heinen. See here. The feds are up to their usual dirty tricks. They even sent a good cop/bad cop team to Apple yesterday to try to rough Steve up. They said, "Hey Stevie, if you don't want to go to jail right away, you're going to have to go on record and say you didn't do something we know you did. If you do that you're going to jail. And if you don't do that you're going to jail. Pick your poison. But it ain't so bad in prison, bud. We'll give you a breadboard and a soldering iron if you cooperate. You can still make great things like iPods. You will, unfortunately, have to sign away the rights to your intellectual property, so we'll own whatever you make. But you can still make it, and that's what counts, right? Now just tell us the truth."

It's scary stuff, I tell you. I've been humbled by it. It's almost enough to make me not want to cash in my Oracle options. Almost.

Anyway, to show our support for the world's greatest visionary of all time, we're having a candlelight vigil for Steve tonight. We're all going to meet at the Apple Campus at 7 PM. Oh, and it's not really a "candlelight" vigil. It's more like an iPhone and iPod light vigil. So don't bring candles, okay? This isn't a Metallica concert. Bring your iPhones. Bring your iPods. Bring your MacBooks and MacBooks Pros. Bring them all and turn them on. Shine them towards the heavens and light up the night. Let's show the SEC that we're not going to take any more of their regulatory shit.

So get off Facebook, friends, and stop talking on your iPhones. Get out tonight and show solidarity with Steve. Be an activist, not an apathist. See you there.
Posted by Larry at 9:46 AM