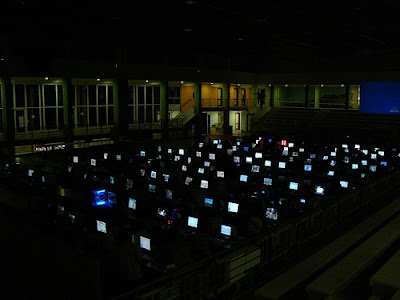 What do you call a LAN party where women flash for frags, the Kegs never run dry, and three circuit breakers blow at the same time? You call it a success, that's what. It all happened at the Oracle LAN party last night. At one point there were over 500 guys there. We had a strict dress code for the women -- nobody got in if they were wearing more than a toga or a two-piece bathing suit. Sure it was sexist, but Safra said it wasn't a problem since it was after hours and by invitation only. And the women weren't even the best part. The best part was that I won every single game of Command and Conquer 3. Yes, my personal engineers rigged the game so that I would win, but I was still kicking ass. Seriously. Ask anybody who was there.
Posted by Larry at 1:03 PM