My weekend with Schwarzenegger 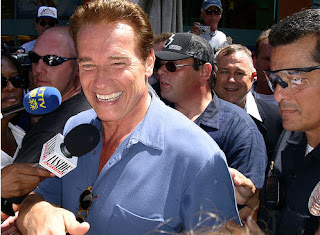 And what a weekend it was, friends. On Saturday we went to the 31st Annual Muscle Building Benefit Lunch in Sacramento, and that afternoon we attended an anti-feminist rally in L.A. I didn't even know anti-feminist rallies existed, but apparently this entire movement has been around for a while now. Whatever. I bought a lifetime membership at the rally. Hugh Hefner was the keynote speaker, and the crowd went wild when he came out -- just wild. This one dude standing next to Arnold the whole time was jumping up and down and giggling like a teenage girl. At one point he even spilled beer on Arnold's suit, which didn't go over too well. And then on Sunday, Arnold and Karl and I went cruising around Woodside in the Karmann Ghia, looking for boobs and butts. We did see some nice tail. Arnold brought his paint ball gun, which he said would come in handy if we ran into any "girlie men."

Yes, I know what you're thinking. Crazy. That's what I thought, too. Anyway, the whole point of the weekend was to get Schwarzenegger to legalize pot and help me secede from the United States. Because I've actually wanted to turn my Woodside house into its own sovereign nation for a while now. Want to call it Larryland. I've already had the flag and constitution drawn up. All I need now is government approval.

But would Arnold help me? Would he throw yours truly a bone? No, he would not. He said he knew where I was coming from, but he couldn't help me. But wasn't California a great state? Especially with him as governor. I should be thankful to live in his jurisdiction.

Whatever, bonehead. Larryland is going to happen, with or without your help.
Posted by Larry at 11:39 AM