People are getting tired of IBM 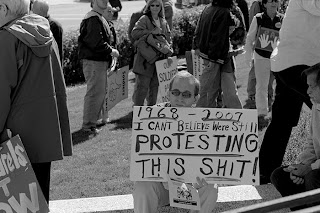 See here. One of these Union 2.0 organizations actually had the nerve to picket IBM. In Second Life. With avatars and virtual protest signs. Which is really great, because for the longest time now IBM has been like that rich old dude who has Alzheimer's. They're a scary corporation. They really are. They give money to everybody, but they don't know what they're doing or who they are. And nobody has had the balls to pick on them. Until now. Their own employees have taken to the virtual streets to throw virtual Molotov cocktails at IBM's virtual headquarters in a virtual world. Not sure how much good that's going to do them, but I say good on them. Next step is to create a Facebook application that lets you throw cream pies at Big Blue employees. Trust me, that'll just kill IBM management.
Posted by Larry at 11:38 AM