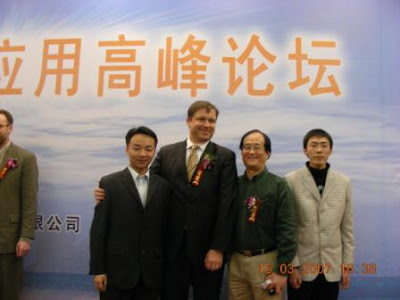 More big news to report from China today. Marten Mickos, MySQL AB's fearless leader, announced that MySQL took third place in some Chinese technology competition. Not for winning on any technological basis, of course. Everybody knows that MySQL isn't superior to any other database out there. They won on the basis of their hiring practices. See here. According to Zack Urlocker, Executive VP of Products, MySQL AB "may not have all the perks offered by big companies, but at the end of the day, developers know they are working on something important and they can do it from their home rather than relocating to Silicon Valley." Um, yeah. Not quite sure what to say to that, except that if it made sense to the people in China, it'll probably make sense to somebody somewhere here in the States. We have a lot of turds here who want to work from home. Just look at Bill Gates.
Posted by Larry at 11:49 AM