AOL moving headquarters to tent made out of recycled AOL CDs 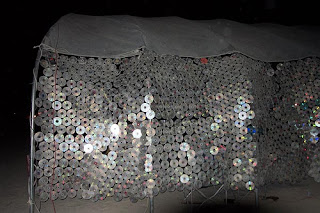 Jesus. I can't believe this is really happening to Ted Turner's nemesis. I really can't. Even I used to use AOL back in the day. Anyway, here's an excerpt of something I found on the Internet.

"In what appears to be a stunning sign of the times, and in perhaps the largest gesture of corporate goodwill this month, Web 2.0 victim AOL said today that it will direct its remaining 73 employees to assemble a new tent headquarters structure in New York City. Ron Grant, AOL's president and CEO, said that he's excited by the news. 'I just have so many AOL CDs that I need to get rid of,' Grant said while walking from Dulles to New York. 'It's great. I'm happy I can give something back to the company.' When asked how he planned to return his company to profitability, Grant said the company would sell advertising on its tent and 'make money off the Internet.' Grant said AOL was also planning to construct pit latrines in Central Park and then charge vagrants to use them."

UPDATE: I just called Ron on his cell phone and asked him about sending in AOL CDs. He said yes, people can send their personal AOL CD collections, but they’re only taking back 5 CDs per person. You can, however, send another 5 CDs if you also send something of value that AOL can auction off. Ron used the example of heirloom diamond earrings. Anyway. Just a FYI for you AOL fans.
Posted by Larry at 7:54 AM