Microsoft is getting dirty 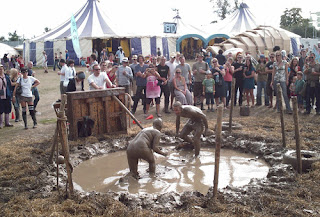 Special thanks to the reader who sent in this breaking news story from Mary Jo "I love Microsoft" Foley. According to the article, "Microsoft execs also announced that, starting today, customers who migrate from Oracle to SQL Server will get a 50 percent discount on the price of SQL Server Enterprise Edition or 25 percent off the price of Standard Edition." In other words, Shit for Brains wants to mud wrestle with me. Like the fat kid in elementary school who gets picked on one too many times, SFB has stripped down to his tighty whities, waded into the muck, and called me out. He wants to prove himself, and he's out for blood. Thing is, I don't need to fight the guy. Oracle has better shit that runs on every operating system, not just Windows. So go fight somebody your own size, Steve. Maybe, um, Sybase. Yeah. They'll probably take the bait.
Posted by Larry at 6:40 PM