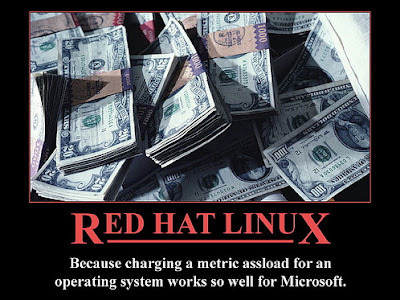 These Red Hat people are a riot. Seriously. I mean, check this out. After spending the entire day watching the rest of the world react positively to Europe's decision to punish Microsoft, Red Hat CEO Matthew Szulik finally issues a press release commending the decision. Szulik says, "Given Red Hat’s firm belief that competition, not questionable patent and trade secret claims, drives innovation and creates greater consumer value, we were pleased with the overall decision and look forward to examining the decision in greater detail." In other words, Red Hat strongly believes that buggy open source operating systems drive innovation. But only when customers pay Red Hat thousands of dollars per year to support the buggy open source operating systems. That's where the greater consumer value comes in. Get it? You better. Because according to Szulik & Co. Red Hat's pretty much the only enterprise alternative to Microsoft. So good luck, dudes. And remember to use protection. Because honestly, I wouldn't touch that company with a ten foot pole.
Posted by Larry at 12:05 AM

Actually Oh Great Yachtsman/Pilot/DBA On High, this morning they changed their mind and complained about the EU court decision. See http://investors.redhat.com/phoenix.zhtml?c=67156&p=irol-newsArticle&ID=1052584&highlight=