SFB wants it all 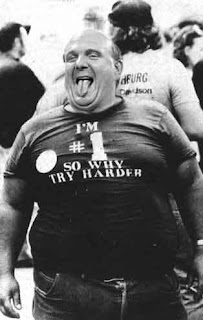 See here. Looks like some Microsoft flake was trying to be a hero by offering to wash and wax people's BMWs in exchange for votes for Microsoft's new XML document format. Shit for Brains probably sent him a bunch of wax and polishing rags. Funny thing is that the format still failed to get ISO approval. Gee, I'm shocked. And I'm also shocked that the Seattle Times got the story all wrong. Like with this quote: "There's no obvious victim, like Netscape, to suggest Microsoft is stifling innovative new companies." Um, yes there is. It's a little company called Sun Microsystems. Have you heard of them? They're right on the brink, but they're still alive -- at least, they were the last time I checked.

Listen, Steve. The people have spoken, and they have said no to your frigged-up standard. But you're not listening, are you? You're going to try again and again and again until somebody drills you new ears. Shame on you, freak.

Special thanks to the dude who snapped this picture of SFB way back in the day. SFB never had hair, did he?
Posted by Larry at 4:44 PM