Shit for Brains is buying a bike 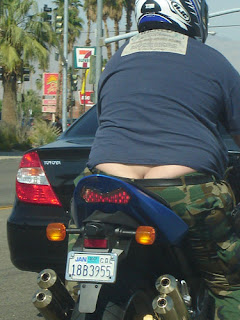 A reputable source has just informed me that Microsoft CEO Steve Ballmer will be purchasing a crotch rocket or a chopper early this week. Apparently Shit for Brains is leaning towards the chopper because it costs less and he wants to make lots and lots of noise and cruise down the highway in spread eagle position. That and he wants to show off his ass crack. According to the source, he’d like to feel the wind against his tongue and his bald head and his sweaty armpits. So he’s buying one. And he’s also buying a lifetime membership in the Hells Angels motorcycle club. The source said that SFB claims it was his wife’s idea, but everybody knows that’s a bunch of baloney. Personally, I think he just wants to get all of the anti-trust stuff off his mind. Maybe it’ll help. All I know is that’s a lot of power in between your legs. I hope SFB can handle the heat.
Posted by Larry at 9:32 AM