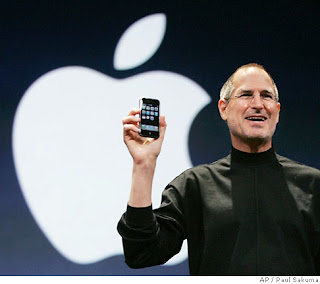 Apple’s really jerking Steve around on this European iPhone announcement they’re going to make next week. According to Steve, the board is worried about him slipping and talking about a country that’s not located in Europe. Al Gore was going on and on about how the dude didn’t graduate from college and can’t locate any country on a map except India. So first they told him he needed a crash course in geography. Katie Cotton said, look, you’re taking this geography session at Cal Tech or Phil Schiller's doing the announcement. And Steve said fine, okay, whatever. But then when he showed up late to the session, Katie blew her top and said they might not say anything at all. She said she had it all planned out and that Apple was just going to say it had no comment and then it would let the service providers in Europe take care of everything. But now she’s changed her mind again. She’s lined up George Bush’s geography teachers and wants them to fly to Europe with Steve. She says they’re the best money can buy and if they can’t help him nobody can. So, basically, if he can’t locate Germany on a map by the time he gets to Europe, he’s not doing the announcement. I don’t know what he’ll do if that happens. He might have to go to the red light district in Hamburg or something. We’ll see.
Posted by Larry at 11:06 AM