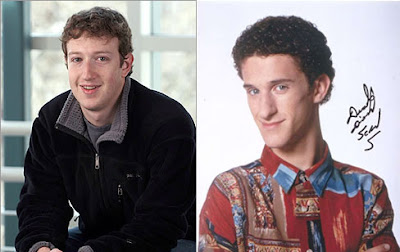 So I'm sitting here reading these articles about Facebook and I'm thinking, Jesus Christ, Zuckerberg looks like that turd from Saved by the Bell. You know, that weird guy named Screech. (See resemblance above.) And actually, now that I think about it, they have more in common than just physical appearance. They both have $2,000 curly hair cuts that make it look like they just rolled out of bed. They both dress like people from the late '80s. They both have problems meeting and interacting with women. And neither one of them knows when to stop. In fact, I guess the only thing they don't have in common is shooting pornos. The real life Screech is the Dirty Sanchez expert. I don't think Zuckerberg has gone there yet, but you never know. The nut doesn't fall far from the tree as they say in Chicago.
Posted by Larry at 8:59 AM