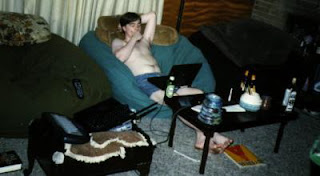 I had lunch with Eric Schmidt today. Little Larry advice here: Don't ever eat with the guy. Seriously. I mean, the dude eats like a friggin horse. He just devoured everything on the table, including my hot dogs. No joke.

Anyway, in between bites he said Larry, whatever happened to that old tech news site? The one with the black and green color scheme that always had stories about NASA and cold fusion and inflation as it relates to string theory? I asked him if he was talking about Slashdot. He said, yeah, that one. And then we got into it. We decided that CmdrTaco AKA Rob Malda has basically gone insane in the little dream world he's constructed for himself. The dude needs a reality check. Linux isn't going to win, the Matrix isn't the coolest movie anymore, and Digg is just friggin killing Slashdot. And after I got back to the office and scoped out the guy's personal website, I got really worried. I thought he might have overdosed on Visual Basic or Red Hat or something. But then I called Eric and he said, no, Taco was fine. Because he had just run Malda's IP address through all of Google's records and found that he'd been searching for things like "Windows NT" and "Hypercard" and "Microsoft Antitrust suit" and "Britney Spears is sooo fucking hot" within the past week. So no. Rob was fine. Well, maybe not fine. But alive at least.

Rob, if you can read this right now, take a shit and get a shave, bro. Get off the beanbag, put on a shirt, and go buy a Mac. Seriously. They're in vogue these days. And then surf on over to Digg and catch up on the news, okay? A lot has happened while you've been, well, away from us. Then get some help. I mean it, Rob. Otherwise I'm going to call the authorities and have them help you. Because nobody should be forced to use Windows ME for the rest of his life. Not even you.
Posted by Larry at 9:08 PM