This one's a double scooper 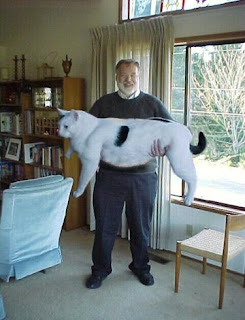 I actually regret ever telling anybody that I love cats and take in strays, because now I get all these felines dumped in front of my house. I guess I can understand it. I mean, if Joe Sixpack gave his girlfriend a cat and she absolutely fucking hated it, what's he going to do? He's going to bring it to Larry, the guy Channel Six called "the cat woman on steroids." And Larry's going to take it in. Anyway. Yesterday I found this one sitting outside my front door. It's a pretty nice fat cat, but sometimes when I walk in the house, I see it walking around in circles. And I swear to God its eyes are crossed. So I'm thinking it might have down syndrome or something. And it digs holes in the backyard and eats hamburgers and fries and is always taking dumps. Yeah. Like, the bad kind that stink up the whole house for hours. It takes like twenty of those a day. So I named him Ballmer. There's just... something about him that reminds me of Stevie B.
Posted by Larry at 9:06 AM

You should collect that shit and give it to Steve so the next time he gets a call from Redmond he has some fodder to feed the welcoming charade.

"Hey everyone, I'm Steve Jobs and I like sharing. Today I am going to present Apple's newest product: the iCrap - made specially for Microshaft employees. Each turd is hand crafted by Ballmer the Cat. Why an iCrap? What a silly question! Watch how easy it is to fuck with your cubicle buddy - just place the iCrap on his chair and watch him have a 'blue screen' hissy fit and vomit all over the place. Don't have enough shit streaks in your life already? Now you can smear shit everywhere!"

It would be a huge success. Jobs could do it too. Start off with some 'leaked' photos of blurred out crap. Then claim that they are not making that crap. Then on the pretext of some silly government regulation - take just one to Redmond and show it off - but don't really show it as a functioning piece of shit. Then release some ads to show off the crappy features. Then when the Microsofties are begging for one - sell it to them for $500 a turd.

Sure it would take time. Like my grandmother always said: when life gives you shit, make some shit-monade.