Step into my office, Mickos 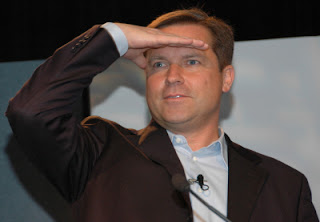 I always knew the database for kiddies/retards/freaks/gang-bangers called MySQL was eventually going to self-destruct and completely ruin itself. And now, thanks to the hard work of Marten Mickos, it's halfway there. See here. This little turd of a CEO has been making a real name for himself recently. Now he actually thinks he can sell his crappy open source database. Yeah. As if he could have his stupid GPL cake and eat it too. Listen, butthead. Nobody used your database when it was free. What in Eurohell makes you think you're going to be able to sell an enterprise version of it?

You better check your head, freak. Because your card is about to be pulled. In other words, you're about to crash and burn like a MySQL database running like, say, 5000 simultaneous queries.
Posted by Larry at 11:06 PM

What is he looking at in that picture? He is inside.

Don't try looking too far into the future Mickos, you might find you are staring into the pit of your own demise.

Look how well capitalizing on free software worked for Redhat. This is going to be a really nice spectacle. I am going to have my secretary start ordering roses, because when MySQL is buried there will be a lot of dead weight to cover.