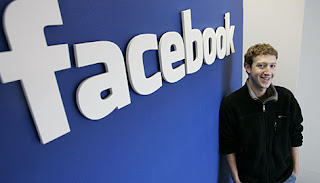 I love these kids who drive out here from Boston or Nashville or wherever and think they're hot shit. They have a couple girlfriends and daddy's BMW and big ideas about changing the world. And the best part is that they all think they're original. Like thousands of other guys before them didn't do exactly the same thing exactly the same way, right? Yeah. Cracks me up.

So anyway, this guy comes in to see me yesterday afternoon. I see him walking down the hall with two girls on each arm. He's not wearing any shirt or shoes, and his shorts are ripped all to shreds. Oh, and he's carrying a surfboard, too. And his hair is all curly and greasy and sticking up like the guy's in Napoleon Dynamite. So I'm about to call Oracle Homeland Security, because the guy looks like a real flake and a freak and I'm not sure who let him in or why he's walking towards my office.

And then he says, hey Larry. How's it going? I'm Mark. Remember me? And I'm like, Mark? Mark who? And he says, Mark Zuckerberg. You know. The Facebook guy. Then he drops one of his trademark "I'm CEO...Bitch" business cards on my desk, and I swear to god all of the girls with him gasp like they've just seen Matt Damon or something. And I just sit there, because I'm not really sure what else to do. And then he says, look, I'd like some free complementary Oracle databases to store pictures of all the drunk girls in bikinis and guys hitting bongs and all the other beautiful people who have decided to use Facebook. It's a really great business opportunity for you and Oracle, Larry. Like, you know, Facebook will be using your databases. And then all the girls gasp again.

And I'm just sitting there trying not to laugh, right? I finally say, gee, Mark. That's a really nice offer, but I think we're going to have to pass this time. And if you ever come into my office and spout shit like this again, I'm going to have to cut your funding. And then he rolls his eyes and says, you don't fund me Larry. And I'm like, uhhh, that's what you think, kid. Who do you think owns the venture capitalists who own you? I do, you little turd. And then he just laughs and walks out.

You better be careful, Zucker. Because you're going to lose your street cred if you keep talking like that. God, some people have a lot of nerve. I would can that kid right now if I didn't look at girls on Facebook like twenty times a day.
Posted by Larry at 7:23 AM

Yeah, I don't know what is worse: