I get all my best ideas from Frank 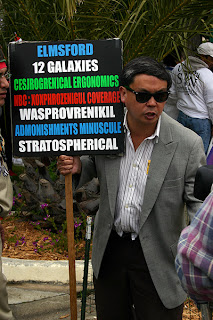 People come up to me sometimes and say, Larry, how did you come up with all this stuff? Where did you find the inner-strength and creativity to invent things like the relational database, BMW Oracle Racing, and the kegerator? You're an f'ing genius, Larry. Well, yes. It's true that I invented the relational database, but I can't take credit for BMW Oracle. That was all Paul Cayard's fault. And just because I have over 300 hand-made kegerators on my yachts doesn't mean that I invented those either. Even if I wanted to take credit for something as cool as the kegerator, I wouldn't. It's just wrong.

But anyway. Back to where all of my creative juices come from. To be honest with you, I tap my main man Frank Chu for all the big juicy ideas. Most of you probably know him as San Francisco's most famous protester or whatever, and maybe you think he's a mental case, but let me tell you. Frank here is a modern day visionary. Kind of an Oracle in his own way. Dude's a genius when it comes to string theory, quantum mechanics, and chaos theory as it relates to databases.

So I fly him out to Aspen every once in a while. I wine and dine the dude behind closed doors, let him take a couple hits on the monster bong, and watch him do his thing. Let him talk about the new schemas and tablespaces. Let him talk about the 12 galaxies and the government corruption. It all starts to make sense after you listen to him for a couple hours. We're incorporating all of this information into our 12g release. You probably think 12g is just another version number or something, but it's not. It's short for Frank's 12 galaxies. My R&D people won't let me say much more at this point, but take it from me. This is one release you're not going to want to skip.
Posted by Larry at 10:43 AM