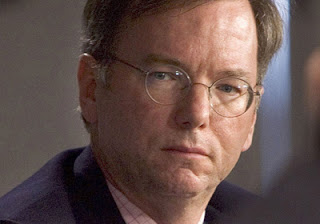 And he’s crying like a big baby. Blubbering on and on about how the Google kids are all depressed after reading the articles that say Google’s hit the skids. Apparently they’re riding their Segways a lot less often and popping Prozac and Paxil in the bathroom. And that’s not even the half of it. They’re missing their massage appointments, drawing strange things on whiteboards, picking their noses while people are watching, and even driving their SUVs to work. He said security had to escort this one dude out of the building because he parked his Hummer in the employee parking lot, which is prohibited by company policy.

I’m like, Eric, bro. Google’s going through a mid-life crisis here. You need to do something. And he stops blubbering for a minute and says sure, Larry. But what? And I say, well, you have an identity problem on your hands, Eric. You’re the search company, but you’ve lost sight of that. Now you’re into all kinds of crazy shit like online word processing apps and Google Mars and even this new phone. How the fuck did you think you could get away with that type of stuff, Eric? And then he starts crying harder.

I wait it out. After he stops blowing his nose, I tell him that he needs to focus on what he does best. Stick with searching and ads and maps and stuff like that. The Mars stuff isn’t going to fly. I mean, I know it’s fun. I do. But Wall Street doesn’t care about searching maps of Mars. All they care about is the bottom line. What Google needs to do is under promise and over deliver. That’s how Oracle does it. That’s how Apple does it.

And he says, right, this is good stuff. I’m taking notes here. I could just see the poor dude sitting there in his office, rubbing his eyes and looking out the window at the girls on the volleyball court. And then he says, thanks Larry. I appreciate it. I really do. But I’ve got to go. Larry and Sergey are here with iced tea.

And I’m thinking, great. That’s what the founders are calling their Googleaid these days. Once the roofies kick in, he won’t remember shit. I love Eric to death, but I worry about that guy.
Posted by Larry at 12:49 PM

Eric is probably a nice guy, but he runs that company like a dickless version of the tooth fairy. I mean, come on man - Larry and Sergey are a couple of lego building - converse wearing spaz freaks. What do they teach people at Montessori schools anyway?

But Google is email? Google is Word Processor? What's next: Google is shit-streaked toilette paper?

Google is fucking up its brand and needs to steer its shit stick back into the land of milk, honey, and hot girls.

Eric should follow what Apple did to Steve Jobs in the 80's. He should get rid of those two fart knockers before it is too late. Plus it will be excellent publicity - everyone loves a good tar and feathering.