If Sun was a ship, it would look a little like this 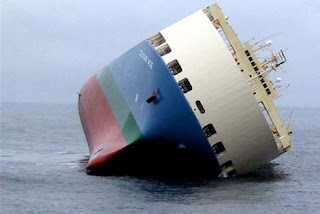 The best part is that the captains won't even acknowledge the problem. According to them, it's normal for the ship to take on water and lose cargo and start sinking. Full speed ahead, right Schwartz? I mean, you've only made about 3,000 people walk the plank so far, and your CFO Michael Lehman will only say that "we have to continue lowering our cost structure." See here. Listen, Schwartz. Could Michael say "Shit" even if his mouth was full of it? Because if he can't, and he won't, and he wouldn't even consider saying the word, maybe it's time to make him walk the plank. I dunno. Just seems like you'd want to get rid of the people ripping holes in the hull.

Oh, and another thing. While you've been busy trying to bail out the boat, the open source pirates have made off with all your stuff. Open Office, Solaris, everything Java, etc. It's all gone, bro. You gave away the crown jewels. Which actually raises the question: Is it even worth saving the boat at all? I mean, if there's nothing onboard except a bunch of crappy servers with RISC processors, maybe you should just abandon ship. Or did this dude just take the last lifeboat?
Posted by Larry at 9:39 PM