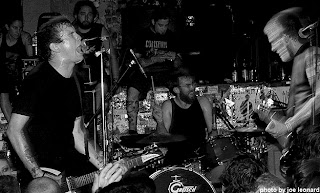 And it's kinda weird, because I really wasn't into music before the iPod. I mean, sure. I listened to a little Michael Jackson back before he was white. And maybe a little Queen, AC/DC, ABBA, and even Kiss. But there weren't any good music players back then, and honestly, Walkmans were never my style. And don't forget that I was busy building the largest enterprise software company in the world. I didn't have a lot of time to listen to music.

But times have changed. Now I've got the 80GB iPod loaded with every punk band out there. You name it, I've got it. And I'm such a sucker for punk shows. Last night I saw Against Me! which was awesome. There was a sick mosh pit, too. I was in there, fucking shit up. In fact, I even ripped this one dude's earring out after he called me an lazy old apathetic pile of meat-eatting corporate shit. His friend with the big red mohawk watched the whole thing go down, and afterward just kept staring at me and saying, "Respect." After all that, I think it's time to get the mohawk. I'd look good in a mohawk, right? That's what I keep telling Melanie, anyway. She's just not buying it.
Posted by Larry at 8:29 AM

Larry, bro, the 80's are over man. Punk is dead. Rap is dead. Madonna should be dead. You are almost dead.

It is great to hear that you can still tear the jewelry off of young men, but you need to take a chill pill and make sure you are manning the helm. If the captain is out stroking his shit stick, how can he be steering the boat? Like any good ship, Oracle will run on autopilot for a while; just don't get cocky. Before you know it you will get drunk and pull an Exxon Valdez - or even worse - a SUN Microsystems.

Your shareholders want their ca$h. So put the munchies down, get off your bean bag, and start fucking shit up in the board room - not in the mosh pit.