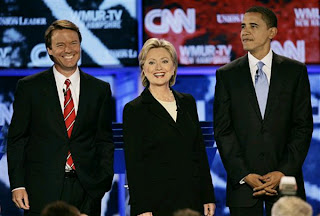 We Americans love our politics. I guess now we're teaching kids who aren't even potty trained how to vote. The little turd droppers know how to push ballot buttons before they know how to flush a toilet. It's crazy. And the saddest part is that it doesn't even matter. Because first of all, Diebold uses MySQL to manage the ballots, so of course votes are going to get lost and destroyed and flushed down the toilet that is MySQL. Little known secret here: Marten Mickos is a fascist. So there's that. And the other part of the story is that there's another, newer constitution that most people don't even know about. The new constitution says that only the twenty richest people in the world get to vote for the United States President. We just keep the old constitution around so that people don't wig out and go postal on us rich dudes.

So, anyway. This little thing I call the freak show is off to an early start this season. Bill Gates and Carlos Slim found a lot of good talking heads this time around. In fact, they even found a woman and somebody who claims to be a real live African American. Bill keeps them on a pretty short leash, but sometimes their programming goes all haywire and they start ranting and raving and talking about bumper cars. See here. Personally, I think having talking heads is crazy. If it were up to me, I'd just install a mannequin or blow-up doll or something. At least then we'd have the real thing in office.

But it is fun to watch them on TV and pretend that they're actual people who are really concerned about global warming and starving kids or whatever. They really go at it sometimes. Safra wants me to vote for Hillary, but she really freaks me out. Every time I look at her I think she looks like Gil Amelio. But we'll see.
Posted by Larry at 11:37 AM

I'm not really following you Larry. I swear man, you are smoking way too much crappy weed. You of all people should know that voting is about as useful as sticking your dick in a blender.

I haven't voted in 17 years - the year I made my first billion. Who cares who is in power? The dollar is the only bipartisan part of politics.

Buying a politician is easier than buying a car - it doesn't matter if they are democraps or republican'ts. Just call up your local representative and ask them if they want to meet 'Mr. Franklin' - and I guarantee you will see results.