I'm calling it a "Negligent Discharge" 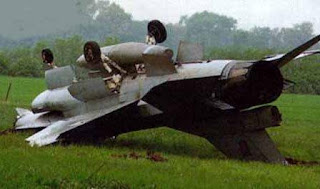 Just got back from escorting Steve up to Microsoft headquarters in the MiG. The whole thing came off without a hitch. Personally, I think that stuff he fed me about Gates handing out anti-aircraft guns was a crock. He just wanted to look important with a MiG flying next to his Gulfstream. Anyway. So after that, I buzzed Bill's house. I just had to after flying all the way up there, you know? I did it flying really, really low at full-throttle, with the afterburners on. It felt so great. Like this giant load had just been lifted off of my chest and I could breath deeper for the first time in years. But then the Air Force scrambled F-16s and I got a little scared. It all happened so fast. I fired a couple Sidewinders. One of the Air Force Falcons was hit. The pilot ejected. He was cool about it, though. I was actually talking to the dude the whole time -- he was laughing his ass off after he ejected. Not sure if that was just all of the oxygen pumped into his mask or what, but he really was a good sport.

Anyway, the Oracle PR people are already on it. You probably won't even hear about a downed F-16, but if you do it's because they've managed to spin the story enough so that it sounds like I was single-handedly defending the Air Force against terrorists. I was gittin' 'er done, as they say in Texas.
Posted by Larry at 8:47 AM