Employees are our most valuable asset 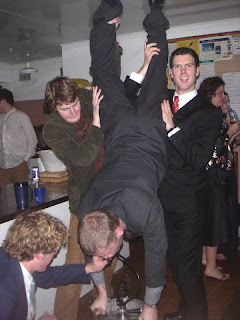 That's why we're treating them right, starting today. Look, I know Oracle has a bad rep here in the valley. People seem to think we're some kind of heartless soulless evil corporation that's worse than AOL or Microsoft. That or they think we're a high-tech anthill with a bunch of worker ants and baby ants and one big fat queen ant. Or something. Actually, I don't really know what people think about us, but I know it's not good. That's why they go to work at places like Google and Apple before they come to Oracle. We're getting the sloppy seconds of Silicon Valley.

Fine. But get ready people, because we're unveiling our secret weapon today. The program is code-named K.E.G., which stands for Kegs for Engineers and Gurus, and it aims to keep Oracle employees happy with plenty of beer, weed, and whatever else people want or need on their lunch breaks. The HR people tested this on our interns over the summer, and let me tell you, it boosted productivity by about 200%. At least, it did after the strippers stopped coming.

So watch out financial flakes. Because between K.E.G. and our 12g release, we're going to make you look like turds in a turd-bowl.
Posted by Larry at 8:05 AM

Labels: 12g, Kegs for Engineers and Gurus (KEG), The Ranch