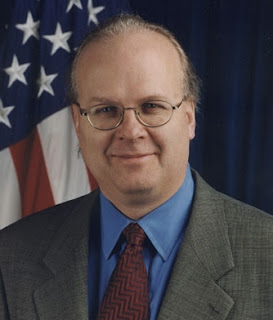 I know what you're thinking, but just hear me out, okay? Sure, Karl Rove is one twisted fuck. But you've got to admit that the man is a master when it comes to creating mayhem. I mean, come on. T.B. practically wrote the book on FUD, smear campaigns, and completely destroying everything that stands in your path. That's how the dude works. He's like a frigging sidewinder missile. You just aim him, say the word, and he goes and takes care of the rest.

Anyway. So the guy calls me last night and says, Larry, I'm ready to jump into the private sector. I've been controlling the most powerful nation in the world for the past seven years, and now I want to help you fight Microsoft and MySQL and SAP. And I'm like, yeah? Yeah? Tell me more. And so he goes into this whole spiel about how the best defense is a good offense, and what Oracle really needs to do is start going after the competition. Like, reposition the losers and then pick one of our weakest competitors and endorse them. Maybe SAP, he says. Make people believe that they're the only other option out there and then napalm the SAP fucks. Point out how they're stealing Oracle's support patches. Show people how their shitty software doesn't scale. Then go in for the kill.

And I'm like Karl, buddy. Come in for an interview on Thursday at 6 AM sharp.

UPDATE: Just talked to Safra about the whole thing. She doesn't trust the guy. I sort of tuned her out after a while, but I think she was going on and on about Hillary. Hillary this, Hillary that, and hadn't I heard about the vast right wing conspiracy and how Karl Rove was a big part of that? Whatever. All I know is that Karl was so right about SAP. Their software really doesn't scale well.
Posted by Larry at 8:20 AM

Karl Rove is the greatest living American. He is a God among men (he dances better than God too). A few years ago he invited me out to Ohio to play a game he called: "fraud the vote". We had a blast. It was almost as fun as getting Saddam into power in the 80's.

In the mid 70's, we went into a comedy club in Baghdad and found this really funny comedian. The guy was really charismatic and did an excellent Richard Nixon impersonation, so we cooked up a military history for the guy and turned him into a real hero. Saddam turned out to be a natural born dictator. I guess that doesn't compare to taking a flunky coke head washup and making him into President of the US - but it was still really fun. The great thing about Saddam is that he is still alive - and funnier than ever. In 1995 he let a body double take over his job in Iraq, then he immigrated to the US - under the name: Dane Cook. A few trips to the plastic surgeon, some voice lessons by the guy who taught Bush Jr. how to talk like a redneck, and the man has become the funniest man in America.

You can't make stuff like this up. Left wing nut jobs and conspiracy theorists are barking up the wrong tree and eating out of the hands of the Rumsfeld/Cheney propaganda machine. Most people don't understand that these guys have been planning 'world events' for years. They are farmers planting seeds for future generations to reap. After funding terrorism for years, something like 9/11 was bound to happen - and they knew it.

People say we are losing the war in Iraq. God are they wrong. Iraq falling apart is us winning; because the aftermath is going to create fertile ground for US intervention for years to come. We don't want stability, because peace doesn't pay. Recently it was noted that millions of guns and billions of dollars have gone missing in Iraq. Consider this to be an investment. We need enemies - and when everyone is afraid of us we have to build our enemies. The sand rats in the middle east don't have guns or military training. We trained and armed Saddam's men and Osama's guys - both of those investments worked out perfectly. If the returns on this investment payout, we should be looking at quite a profitable future.

Thank god for men like Dick Cheney and Karl Rove. These guys know how to get 'er done.

I was thinking about hiring Turd Blossom, too. I've studied him in many photos and think he would be perfect for our needs. You see, our lawn jockey has rusted to the point where it can't even be Gorilla-glued to stand upright. I think Karl, with that chubby little mug that just screams "You aren't rich enough to live here!" would be perfect. Lovey thinks so, too.