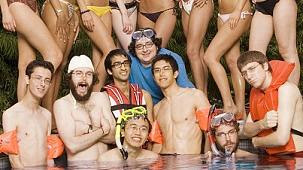 Inspired by the recent nerd auction held by the Linux Users Group at Washington State University, MySQL AB’s Marten Mickos has decided to hold an auction of his own. Zack Urlocker, Executive VP of Products, says that the auction will raise much-needed money for the open source company and boost programmer productivity. "Nerds need love, too," said a visibly emotional Urlocker. "When we saw the news about the guys at that LUG, we knew they had struck nerd payola. But we believe we’re better than those doofuses. They need haircuts and TLC. We already have haircuts. And we really think the girls are going to go gaga for our geeks. The girls can run queries on us. We now know how to replicate. And we can perform the all-powerful mysqldump." Urlocker said that MySQL AB has started circulating a photo (right) of MySQL employees with their shirts off and will be calling the auction MyNERD. Due to the complexity of the auction, next month’s event will be conducted on eBay with Oracle 11g databases.
Posted by Larry at 9:16 AM

Sounds like a shark attack to me. Shouldn't nerds be able to be a little more original than to copy an already copied act? Didn't this all originate from MTV's Beauty and the Geek? Come on now...actually use those brains.

Actually, I think we need haircuts also. So lets hold off on this until Q1.