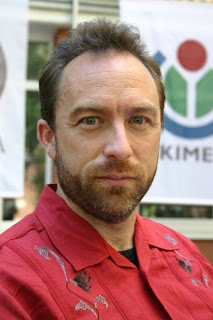 Actually he's already been here for a while. But now he's moving the whole Wikimedia enchilada out here to the Valley. See here. I guess this means Wikipedia is out of the woods now, eh? Because last time I checked Jimbo was thinking about selling ads on encyclopedia pages. I think the real problem is that the dude can't get away from Wikipedia. He wants to be the next Bill Gates or whatever, but he just can't shake this rinky-dink non-profit he started. I hear that people always come up to the guy and call him the Wikipedia man. That and his rag-tag band of college student contributers always want him to speak at their schools. He must just hate that. And who can blame him? When you want to live on a sailboat with beautiful women hanging off each arm, you need money. Serious money. Money you're not going to be able to make with a non-profit organization. So I'm thinking about calling the guy. Maybe I'll invite him golfing and sailing and then offer him a job at Oracle. Either way, I'd like another friend. The guy's obviously smart, even if he does insist on using MySQL.
Posted by Larry at 7:46 AM