“Salesforce is like the rent-to-own couch you had back in college, only anybody can sleep on it and you never actually own it.” 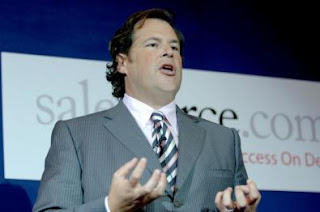 Sometimes I feel kind of sorry for Marc "the Abbie Hoffman of software" Benioff. The dude has a long twisted road ahead of him with this SaaS and Force.com stuff. Because here’s the thing. He isn’t just selling Salesforce.com products -- he’s selling an entire paradigm shift. He’s hitting the pavement and saying, "Look, you turds. We know you’re used to installing and using Microsoft Office from your PC. We also know you’re used to using stuff like Google Apps, Basecamp, and even Google Gears for free. But now you need to get used to using applications online and you need to get used to paying us for them." It’s a ridiculous concept. It really is. How would you like it if somebody said you were going to have to rent your shoes from now on? Or you were going to have to rent your wrist watch? It doesn’t make sense does it? The same is true with Salesforce products. And Force.com is even worse. I mean, be honest here. Are you really going to pay for a development platform when you can get literally dozens of superior development platforms for free? This isn’t the same as when Oracle was selling the relational database back in the '80s. This isn't a new product -- it’s a bundle of stuff that has been repackaged, rebranded, and offered in a new way. Same shit, people. So yes, I do feel a little sorry for Marc. But then I walk down to Oracle’s basement and see all those vaults full of gold and I remember that we won for a reason. The bottom line is that we’ve got better stuff and we know how to sell it. So take that, Marc. You little turd.
Posted by Larry at 9:55 AM

a lesser man would had made fun of his combover

About as crazy as outsourcing your electricity to an electric company.

I mean, come on... go buy your own electric generator.

Getting your power off the grid is for pussys!

Come on Larry. Think of it like you think of women. Rentals....hookers.
Now , doesn't it all make sense ?