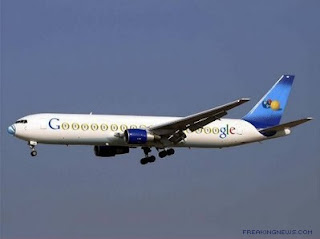 Larry and Sergey and Eric just had to get another one. See here. I called Eric this afternoon to verify. He said, yes, the rumors are true. Apparently Larry wanted all three of them to have their own planes so they could each fly one and have dogfights over LA, and he wanted this new 757 so he could fly it from home with a special version of Microsoft Flight Simulator X. The best part about the 757 is that it runs on a special hybrid blend of dollar bills and ethanol. Larry's convinced that inflation is going to get so high in a couple months that the dollar won't be worth anything, so he wants to burn green backs to reduce the number of bills in circulation which will in turn help decrease inflation. Eric also said that passengers can actually fuel the aircraft while it's flying by sticking bills into the little plastic box right next to the stripper pole.
Posted by Larry at 9:17 PM

yes, rumor has it even turkish lira is closing up the gap with the dollar so this is great help against the threatening turks