These Alinghi guys are toast 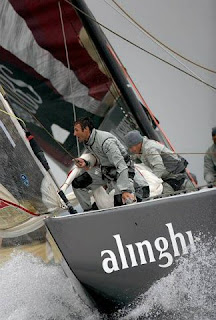 I think Swiss drug lord Ernesto Bertarelli has finally figured out that he picked on the wrong dude. He’s used to fucking with poor people who sail toy boats in places like Dubai and Kennebunkport. He’s won so many times over the years that it probably never occurred to him that he shouldn’t challenge a guy like Larry Ellison. He thought I was just going to roll over when he proposed new rules that would completely destroy the America’s Cup. Um, yeah. Fat chance, crack head. We're going to shut you down. You can cry and kick and scream and shoot up all you want, but it's not going to make any difference. We've already won. You know how I know? Because articles like this one keep appearing and they're making you look real bad. Check out this one quote: "Making American billionaire Larry Ellison 'look like the good guy is hard to do,' yet Swiss billionaire Ernesto Bertarelli has accomplished that, said Gary Jobson." You can say that again, Gary. Listen, Ernie. If you raise the white flag and give up now I'll let you sail in the America's Cup in 2009. Seriously. This isn't a joke, dude. Because everybody knows that I don't just win. I make everybody else lose. It's a little philosophy of mine. Just saying. You can do you whatever you want, Ernie. Okay? I just wanted you to know before we go to court.
Posted by Larry at 10:49 AM