Henning Kagermann has his ass handed to him 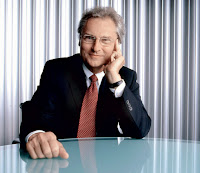 Today's articles were so negative that it really pained me to read them. And that's saying a lot coming from me. This article from MarketWatch says that SAP just destroyed its relationship with Microsoft. And this article from Forbes says that we're smiling over here at Oracle. Believe me, we are smiling. But put yourself in Kagermann's shoes for a minute. You're sitting there watching Oracle buy all of these companies and get further and further ahead. We're literally leapfrogging over your pathetic products. You look at SAP's numbers and then you look at Oracle's numbers and then you get all panicked and shit. Beads of sweat pop out on your forehead. You know you have to do something. But what? Your old tricks don't work anymore. The engineers are working as fast as they can and your R&D department is light years behind the competition. So you think, okay, if you can't beat them you'll join them. You'll take Oracle's consolidation strategy and apply it to SAP.

And that's the heart of the problem. Our consolidation strategy isn't going to work for SAP. They're just not that kind of company. And anyway, they're too late. They purchased a company that was being shopped around and they overpaid by a couple billion. Now Microsoft is going to turn against them. And guess who's going to benefit from that? We will, of course, but also MySQL and to a lesser extent Red Hat. After us, MySQL AB probably has the most to gain, because SAP will probably develop closer ties with them after they fall out of grace with Microsoft. Changes are coming, bros.
Posted by Larry at 7:50 PM