Shit for Brains is splashing into SaaS 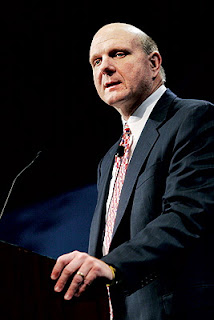 See here. Yes, I know this is old news. What makes it interesting now is that Microsoft is competing with a growing number of companies in this market, including SAP, Salesforce, and NetSuite. Don't laugh at the Microturds yet, though. When the tough get going, the going gets tough. I know SFB is just another butthead fighting over the SaaS table scraps, but Silverlight is actually pretty good. It's nothing to sneeze at anyway.

And I'll tell you this. The only thing worse than Google-envy is Salesforce.com-envy. Don't worry: Stevie B. will want Salesforce.com. When he starts making his little mating call and doing that thing with his tongue, we'll start dropping the hints that we're looking into buying Salesforce. It's our jack-the-price up strategy. We don't really want Salesforce, but we do want to fuck Microsoft. So we'll pretend to want them and plant a bunch of articles in the press and drop some outrageous figure like $10 billion. Then SFB will get all huffy and try to outbid us. It works every time. Just like it did with Red Hat and JBoss. And just like JBoss, Salesforce.com would drag Microsoft down. It would be a terrible buy for Microsoft. But that's Shit for Brains for you. I swear the dude's exactly like the teenage girls I see shopping at the mall. He's always buying a bunch of shit he doesn't really want or need.
Posted by Larry at 9:24 AM

Alright, Larry. Here I'm a little confused. I've seen Shit For Brains make several appearances on your blog comments trying to act all buddy buddy with you. Is he trying to promote his shitty fake shit for brains blog? Sorry, I digress. Anyway, with shit for brains occasionally peaking into your little public diary, why do you openly discuss your strategies to sink the micro-ship?